Highlights from the ECSEL JU Symposium 2018 in Brussels 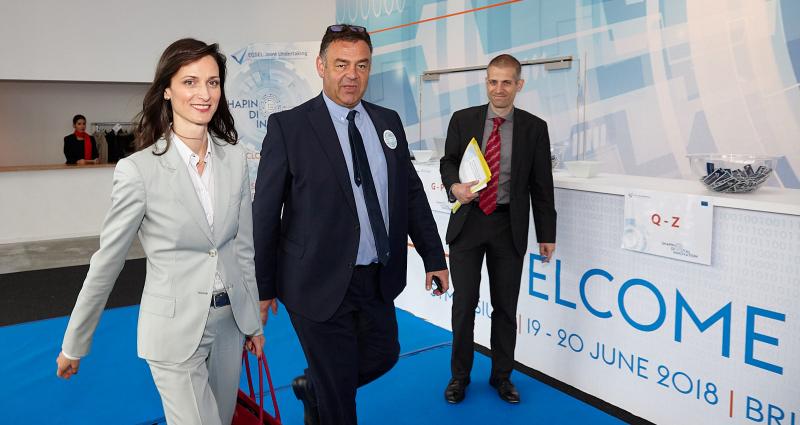 Over 320 European stakeholders, decision makers, and industry and research representatives, gathered on the 19th and 20th of June 2018 at the 2nd ECSEL Joint Undertaking Symposium in Brussels. This key ECSEL JU event focused on Europe’s digital future and the electronic components and systems industry under the new “Horizon Europe” RD&I Framework Programme.

The central theme of the first day was the digital transformation in Europe - what will happen when the exciting new technologies go mainstream, changing the world in the process. The day started with a session led by Alessandro Curioni, Vice President of IBM Europe and Director of IBM Research Zurich. Mr Curioni spoke about the quantum computing paradigm shift, and its potential to transform and complement other emerging technologies, such as drugs design, machine learning, big data, or cryptography and security. This theme was followed by other brilliant speeches, featuring Luuk Borg from the Commission’s DG CNECT, Alberto Casorati from European Investment Bank, and Francois Gilles of Deloitte Luxembourg.

The highlight of the day was a keynote speech by the EU Commissioner for Digital Economy and Society Mariya Gabriel. “Currently, we don't have computing power in Europe that would match our potential. I am personally dedicated to change that. Mastering digital technologies is essential for Europe, and ECSEL JU is a key tool to reach that goal”, said the Commissioner in her speech, demonstrating her support to JU’s current and future activities.

The second half of the day was centred around the new horizons for the ECSEL JU programme, and its potential in fostering technology innovation within four topics: Artificial Intelligence, e-Agri, e-Logistics and Robotics. “European-level initiatives are the way to go, if we want to compete on the global scale”, emphasised all speakers.

The second day, themed “ECSEL JU towards Horizon Europe”, cast light on exciting, real-life examples of how the ECSEL JU funded projects improve the quality of daily life of European citizens and boost business in Europe. A guest of honour, Roberto Viola - Director General of DG CNECT, spoke about the underlying value of microelectronics: “Smart factories, IoT devices or self-driving cars would not function without microelectronics. Progress and innovation in this field will decide whether digital transformation in Europe will be successful”. Mr Viola expressed his belief in a central role played by the ECSEL JU in the ongoing digital revolution in Europe. The following sessions introduced exciting success stories by industry representatives from a number of European countries such as Italy, Poland, Spain and more, giving a complete picture of the significance the JU’s funding plays in these developments.

ECSEL JU was honoured to welcome a wide range of high level speakers, who joined the afternoon session and discussed the upcoming challenges the JU may face during the Horizon Europe programme, as well as potential future research opportunities. The discussion panel consisted of three Members of the European Parliament, Paul Rubig, Lieve Wierinck and Marian-Jean Marinescu, as well as Colette Maloney from the European Commission, Jean-Luc di Paola-Galloni of the Valeo Group, Maarten Sileghem from the Agency for Innovation and Entrepreneurship of Belgium and Sabine Herlitschka, representing the ECSEL JU Governing Board.

The format of the sessions gave the audience a platform to gain an overview of how the ECSEL JU funded projects have had a fundamental impact on the ECS sector and the future challenges which await. The setting also provided an opportunity for participants to engage with speakers through Q&A sessions and to view the full spectrum of ECSEL JU funded projects in a specially designed exhibition space, and an exhibition guided tour, which concluded the second day of the event. The SCOTT project, led by Michael Karner from Virtual Vehicle, received recognition as the best project presented at the event. Outside of the speaking sessions and project exhibition, the Symposium gave an opportunity for stakeholders to network in a vibrant setting, during networking lunches and two social events.